The 2019 Latin GRAMMYs hosted by Roselyn Sánchez, Ricky Martin and Paz Vega, was a 3+ hour show, we have condensed it to some of the favorite top picks, but there were tons of great moment and performances. Here’s a few:

Feel free to ignore the world and listen on repeat.

Opening performance, tribute to some of the most iconic songs

FIRST OF ALL, TEXAS!

We are Texas based so we have to start off by giving a huge CONGRATULATIONS to the two Texas groups that brought home a Latin GRAMMY!

MESSAGES DURING THE SHOW

Best Urban Music Album Winner – X 100PRE – Bad Bunny The Puerto Rican trap and reggaeton artist, called out the big elephant in the room; the exclusion of all the reggaetoneros being snubbed out of nominations and the show, despite having the most views throughout Latin American and massive crossover success with audiences across the globe.

Best Alternative Music Album Winner – Norma – Mon Laferte The Chilean songstress used her platform – both on the red carpet and in her speech – to bring attention to the violence against protestors and women currently taking place in her home country, at the hands of the military and government

Best New Artist – Nella The Venezuelan pop singer expressed her love and gratitude for her family, colleagues and love ones, dedicating her award to them and Venezuela. She also had a message of solidarity for DREAMers, migrants, immigrants. Nella herself recently migrated, after she was accepted to Berklee College of Music in Boston, Massachusetts U.S.A.

Vicente Fernández – This was one of the biggest performances of the night, a historic moment, where three generations of the Mexican dynasty, familia Fernández: Don Vicente “Chente” Fernández along with his son Alejandro, and grandson Alex, sang together for the first time! Don Fernández also received a ‘Premio de la Presidencia.’

Thalía – Another huge moment, Thalía also received a ‘Premio de la Presidencia.’ One of the hardest working Mexican female singers in the game. A trailblazer of our generation that has broken down barriers and opened doors for future female Latina artist…modern day icon, Thalía .

Persona del Año 2019 – Juanes. Not only did Juanes play a montage of fan favorites but he then went into complete fan mode when Lars Ulrich from Metallica presented the Colombian rock star with the award. Ulrich gave a heartfelt speech and even threw some pretty good Spanish is there (in a loving, respectful “that’s dope” kind-of-way, not the pandering way). Truly, one of the best moments of the night.

One of the best moments. Juanes plays a montage and then is presented the award by Metallica's own, Lars Ulrich

Building bridges. There were a couple of collabs with non-Latinx artist but our favorite one was Mexican-American singer, Miguel, who performed “Show Me Your Love” in Spanish with Alicia Keys on the piano. Puerto Rican singers, Pedro Capó and Farruko, joined in to perform their hit “Calma,” which won Song of the Year.

The ‘Sech’uation. Fans were livid and felt Sech (Panamania singer-songwriter) was robbed for Best Urban Song for “Otro Trago,” which he performed earlier in the night with Puerto Rican reggaetoneros, Ozuna and Darell

This was one of our favs by Mexican singer-songwriter Ximena Sariñana and Los Ángeles Azules but it didn’t get a lot of hype, so we decided to include it because, why not! Fun fact: Los Ángeles Azules played at 2018 Coachella a.k.a. Beychella, making them the first cumbia group to play the festival

Mexican-American (and native Texan) artist, Pepe Aguilar, not dressed in his usual traje de charro but instead respectfully wore a solid black suit as he paid tribute to Mexican legend, José José , with a beautiful version of ‘El Triste.”

AND THE WINNERS ARE…

The big winners of the night were actually…not Latinos. Spanish singers, Alejandro Sanz and Rosalía, walked away with 3 Latin GRAMMYs each. However, Alejando is a woke Spaniard that shows solidarity with our community, like raising money for DREAMers, so we are going to go ahead and give him honorary Latino status. 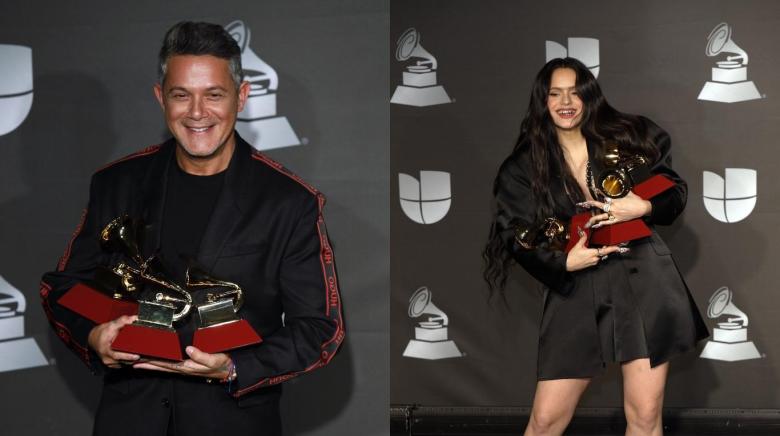