Skip to content
MarySue or "The Tigua" as many affectionately refer to her, has made history as the VERY FIRST NATIVE PERSON (male or female) in Texas, to ever run for State Legislature.  With not more than one article out there, we decided to head to West Texas to meet 'The Tigua" ourselves.

photos and story by: Yol-Itzma Aguirre

March is Women’s History Month and women are stepping up all over the nation, with the most female candidates in any election cycle year to date, including 5 Latinas and 3 Native American women running to shatter the ceiling and become the “First” for the U.S. Congress. However, on the state level, one story has gone unnoticed. We first caught wind of MarySue Femath historic run for state legislature a few weeks ago. As we began to do our research we found that very little had been written on this historic Texas moment. MarySue or “The Tigua” as many affectionately refer to her, has already made history as the VERY FIRST NATIVE PERSON (male or female) in Texas, to ever run for Texas State Legislature – Democrat, House District 75. With not more than one article out there, we decided to head to West Texas (El Paso County) to meet ‘The Tigua” ourselves. 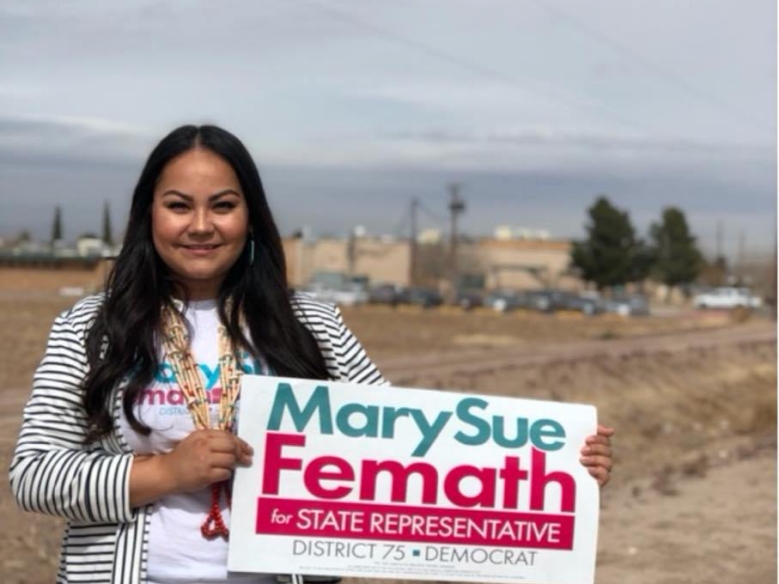 We arrived to Ysleta del Sur Pueblo reservation (also known as the Tigua reservation, derived from the original language of Tiwa) this past weekend, our visit happened to fall within the final days of campaigning so we were very grateful to spend a couple of hours with MarySue Femath and her family during such a critical time.

Walking into the cultural center on the reservation the entire family was already busy working their stations. Her aunt was getting door hangers ready, her mom and husband were with yard signs and the rest of the family was making preparations for their daily block walk.

We caught the candidate in the middle of looking over her to-do list when she looked up and realized we were there — shifting from work mode — she smiled and greeted us with a hug. We were in luck as the youth dancers were about to perform their social dance that takes place every weekend when the surrounding community can come and learn about the tribe.

Watching the Tigua dancers perform the ancient dance, hearing the drum, you instantly realize that this story means much more than we even realized.

Walking over we are able to catch candidate Femath who gives us a brief introduction to her biggest supporter…her little girl. She is able to get in a quick hug and a kiss before Femath’s mother-in-law whisked her off so MarySue and her husband can go block walk with the team.

MarySue comes from the generational Silvas/ Beltran family. Her grandparents, Pablo and Herminia Silvas, were actually the ones who were responsible for getting the tribe federal recognition back in the 1970s. It makes sense that that same spirit of organization and political action would carry on to their granddaughter. When you really think about and recall all the atrocious acts taken against Native Americans in United States history, it makes the impact of what she (Femath) is doing THAT MUCH BIGGER. The Ysleta del Sur Pueblo existed before this was even Texas…and now here we are in 2018 and MarySue Femath is the first in Texas to ever run for state legislature. Take a moment to let that sink in…

Video: Femath’s mother explains how her father helped get federal recognition for the Tiguas

Listening to her mother, Dora, we realized that MarySue comes from a deep lineage for the tribe. Outside the cultural center is a statue dedicated to Femath’s great – great grandmother, Nestora Piarote, who has over 870 direct descendants within the Tigua tribe. Femath’s own mother helped bring accessibility to health care services for the tribe years before they were able have a clinic built. It seems historic women run in the family.

Video: Femath’s mother on bringing healthcare to the Tribe

We walked a few blocks in the residential area of the reservation and as I asked MarySue different questions neighbors who were driving and walking along made sure to stop and show her support with a wave and tell her, “we are with you, MarySue!”

We spoke about the campaign, and what motivated her to run for office. Like most candidates, she saw where there was room for improvement, she wanted to create effective changes and really represent that district –  which includes the reservation – and to be an active voice for her community. She decided she wasn’t going to wait for someone else to make these changes, instead she would run for office.

Returning to the beginning, we headed back to the cultural center. The candidate introduced me to two young dancers, with great pride she explained to me the significance of what the dancers were wearing, “this is another misconceptions, this is not a costume, it is regalia, this cannot be bought at Wal-Mart, it has to be handmade, everything is handmade.”

Femath’s mother, Dora, worked in the city but is also the seamstress for the tribe, her mother before her was also a seamstress. Dora walked us through the details of the ‘Ribbon Dresses’ the young women had on, how those differ from ceremonial regalia and regular daily wear.  In order to make all these different custom garments a seamstress must have knowledge of all the pieces and the significance of the varied elements. This is a special craft that has been passed down from generation to generation.

Keeping it in the family, Femath’s sister and aunt are the the bread-bakers for the tribe. MarySue’s grandparents were once the bread-bakers and the time honored tradition passed from them to her aunt, and now to her sister.

The oven is built exactly as it would have been built over 400 years ago, a rounded mud adobe-beehive dome. Every morning the bread is baked fresh and available to anyone. Everyone is welcome to stop by, purchase and take a piece of tradition back home with them. 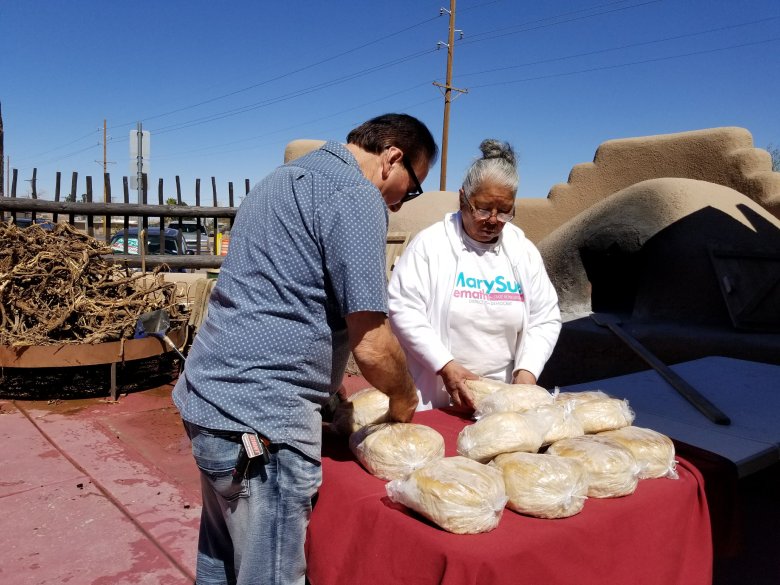 Being the youngest of 7 you would never know she is only 30 years old, she speaks with the type wisdom that only someone who has had to battle the world, can speak with. I asked her if it has sunk in, what her running for state really means, because as I watched her meet with voters I would then asked them if they knew she was running, everyone replied with “oh yes The Tigua.” It is clear, the historic impact is not lost on the community.

Which led to a follow up question, asking both her and the family, what does it feel like to have the pressure of being “The Tigua?” 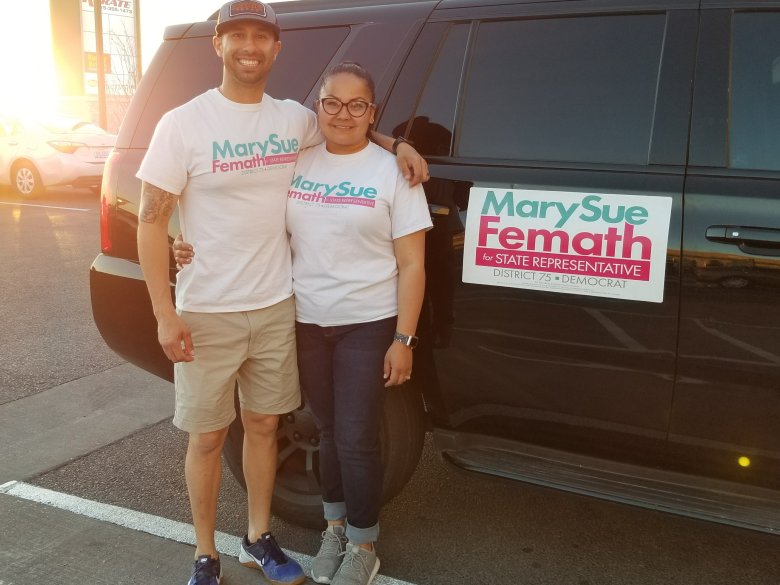 Her husband, Robert Femath — who was wearing his “Team MarySue Femath” shirt — told us with a big smile, he likes it. He is so proud of her and said that when she announced she was running, it took a few moments to sink in and then his next thought was YES, we can do this, I will support you.

The two met back in high school and have been together since then, true “high school” sweethearts. Her mother and father, along with her sister and aunt, said they are “so very proud” that she is “The Tigua.”

As for MarySue, she very much is cognizant that this is bigger than her. She knows that little girls and boys at the reservation, across Texas, can look at her and say, “she is one of us, I was alive when she ran.” It is obvious that she is filled with pride in who she is and where she comes from, carrying tradition and hope with her on this new path that she is walking, paving the way for future generations.

Video: In her words – MarySue Femath message to the future 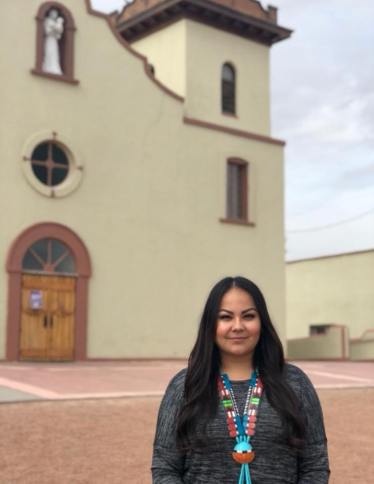 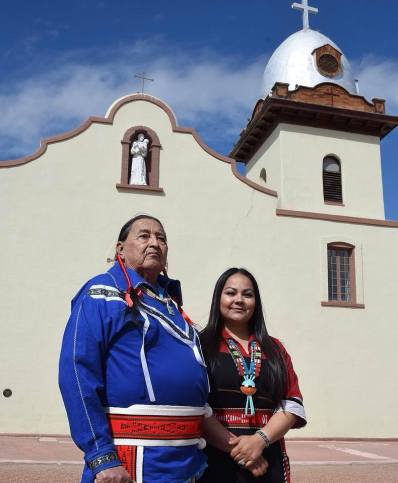 Election day is March 6, 2018. For more information, visit her page at MarySue For 75

This site uses Akismet to reduce spam. Learn how your comment data is processed.